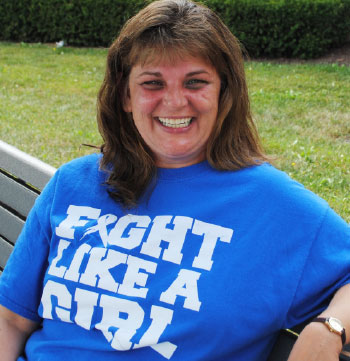 Michelle Baier is a devoted paraeducator for special needs students at the Cedar Lane School in Fulton. Full of energy, she is committed to helping her students succeed. “Really the hardest part about being diagnosed with cancer was not being able to work as I missed the children,” says Michelle.

At 38, Michelle was not expecting a colon cancer diagnosis. The cancer was advanced, having spread quickly to her lymph nodes and liver. She underwent surgery followed by chemotherapy. While she appeared to be in remission at that point, radiation treatment was recommended to ensure she would remain cancer free. Her medical oncologist referred her to Central Maryland Radiation Oncology (CMRO), located on the campus of Howard County General Hospital.

“CMRO is a unique partnership between Johns Hopkins Medicine and the University of Maryland Medical Center. CMRO offers the latest in radiation treatment including access to National Cancer Institute (NCI) sponsored clinical trials. This type of advanced treatment is typically only found at academic medical centers. At CMRO, the two academic medical centers have collaborated to provide advanced treatment in Columbia. So patients do not have to leave Howard County for their care,” explains Sally Cheston, M.D., radiation oncologist and medical director of CMRO.

“Everyone gave me such hope.”

Central Maryland Radiation Oncology was a convenient option and a pleasant experience for Michelle. “The people there were so nice,” adds Michelle.

For six consecutive weeks, Michelle underwent radiation therapy every weekday. As she walked through the front doors of CMRO for each one of her 30 treatments, she felt great support. “Everyone gave me such hope. I lost both my dad and my grandmother while I was sick, so it was a tough time. The staff was so supportive,” says Michelle. She simply knew she was being well cared for. Behind the scenes, complex plans had been established to attack where cancer could return. Dr. Pradip Amin, a radiation oncologist at CMRO, developed a treatment strategy to precisely target the pelvis area where the cancer could reappear.

“Michelle’s was a complicated case,” says Dr. Amin who specializes in radiation treatment of the pelvis as well as prostate cancer. “Yet she was always upbeat and so energetic. We were determined to get her back to school.”

Today, Michelle is in remission and happily back in the classroom!