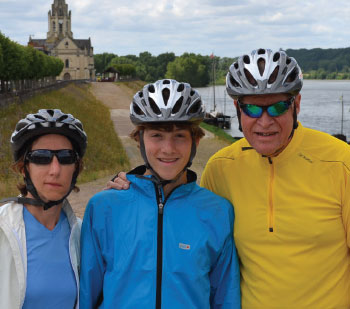 “You simply can’t believe it when you receive a cancer diagnosis. It’s horrifying, devastating and you are completely scared,” explains Michael Osborne of Columbia when he recalls that day in April 2008 when his doctor told him he had a rare form of lung cancer. Because he had no symptoms, it was a total shock. But Michael quickly began taking action to fight the disease. He had chemotherapy and radiation followed by surgery, then more chemotherapy and finally preventive brain radiation.

Michael opted to receive both cycles of his radiation therapy at Central Maryland Radiation Oncology (CMRO), a collaboration between the University of Maryland Medical Center and Johns Hopkins Medicine aimed at providing advanced radiation therapy close to home on the campus of Howard County General. Less than a mile from his house, the site was definitely convenient, but it was the people of CMRO who made the difference.

“This is a terrific practice and what medicine should be.”

“Dr. Cheston is amazing. She is a compassionate, gifted physician and totally with you. When debating whether to have the preventive brain radiation, my wife and I spent two hours in a room with Dr. Cheston as we discussed the potential benefits and substantial risks. I decided to have the treatment. For me that was the most difficult decision. I could not be more thankful for that visit. This is a terrific practice and what medicine should be,” says Michael.

Three years after finishing treatment, Michael found himself back at CMRO. This time his wife, Jane Dembner, was the patient under the care of Dr. Sally Cheston, who serves as Medical Director of CMRO. Of course, the family was shocked by yet another cancer diagnosis, but the decision was easy about where Jane should have post surgery radiation therapy for her rare salivary gland cancer. Central Maryland Radiation Oncology is where this family feels secure.

Now cancer-free for more than 8 years between the two of them, Michael calls himself a “Stage 3 lung cancer survivor,” one of a small minority, and he is quick to add that Jane is also cancer free. This new lease on life means they are both getting more out of life than ever!

In addition to Michael’s job as a rare book dealer, he is serving as event coordinator for Breathe Deep Columbia, a fund raising event to benefit LUNGevity Foundation, which funds promising research into the early detection and successful treatment of lung cancer. On April 26, 2014, Breathe Deep Columbia 5k Walk in Memory of Dr. Clement Knight will take place in Columbia. Michael and Jane, with their son, Daniel, will be walking to raise funds in the fight to end lung cancer. Find more information about LUNGevity Foundation at www.lungevity.org.